CRUSADE AGAINST THE TURK

A rare document in Spanish approved in Madrid—unrecorded in major bibliographies—reproducing a papal bull promising plenary indulgence for the year 1573 to all who complied with its requirements. It was specially addressed to residents of the Spanish territories, including the kingdom of Sardinia. Indulgence was granted to whoever joined as a soldier the war against the Turks—then focusing on the conquest of Cyprus—to religious institutions who contributed to the subsistence of soldiers, or to lay people who, even in groups of three or four, could raise what was needed to pay for one soldier. Confession and remission of sins were offered to those who repented sincerely and visited five churches or altars within or without the walls of Rome, according to the list provided at the end. This copy was acquired by ‘Donna Jeronima’ who contributed 18 golden ‘reales’; the use of ‘donna’ denotes her condition as lady of standing, in charge of a household—an interesting insight into the market for indulgences in C16 Spain. 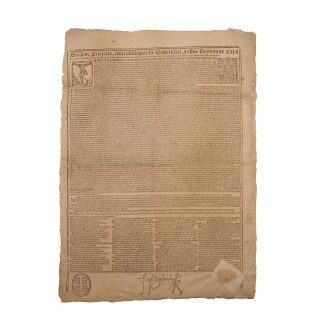