BYRON, Lord Poems (with) The Bride of Abydos (and) The Corsair (and) The Siege of Corinth (and) Parisina (and) The Lament of Tasso (and) Manfred (and) Monody on the Death of Sheridan

Except for the Lament of Tasso, and possibly the Bride of Abydos, all works are first editions. The Poems and Corsair are in first issue, Monody, the second. The Monody on the Death of Sheridan is particularly uncommon. This volume is not for the discriminate book collector, but for a student of literature or the specialised library to complete its collections. 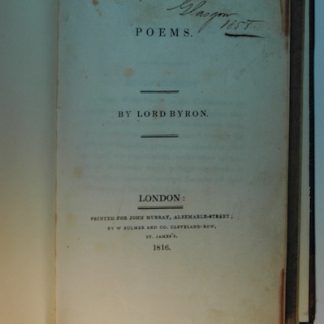