THE MOST CELEBRATED BOOK OF ISLANDS

Rare first edition of the most celebrated book of islands, by the Italian scholar Thomaso Porcacchi, beautifully illustrated with the delicate engraved maps and plans, one for each place, of Girolamo Porro, who also produced the maps for Ruscelli’s translation of Ptolemy’s Geographia in 1574. The first 15 illustrations begin with Venice and her surrounds, then pass from east to west through the Mediterranean, from Corfu, Crete and Cyprus via Rhodes, Sicily and Malta, to Corsica, Elba and the Balearics. The next six are from Northern Europe, the British Isles, Scotland, Ireland, the Frisian islands, Iceland and Gotland. Across the Atlantic are Hispanola, (with a lengthy account of the arrival of Columbus), Cuba and St Lawrence, the islands ending with Ceylon and the Moluccas.

The last four illustrations comprise a remarkably important and detailed map of North America, a smaller version of Forlani’s, and the first depicting that landmass as a single continental entity; it is also the first printing of the first atlas map of North America, followed by a detailed plan of Mexico city at the time of the Spanish conquest. The last two are very attractive and complete world maps, the second specifically designed for the use of navigators. Each of the illustrations is accompanied by a few pages of topographical and geographical description of the subject matter, including principal places, physical features, climate, customs and produce. The Isole is interesting both as a fine example of the most elegant Italian cartography but also as one of the most sophisticated responses to the increasing demand for reliable information about far away places.

Albert Parreño was an alumnus of Princeton and a well-known collector of travel books. 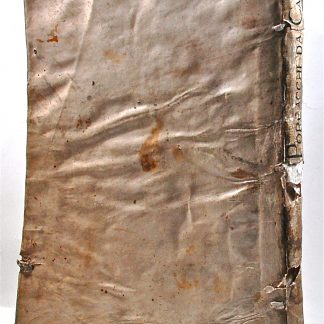