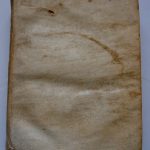 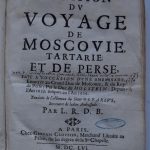 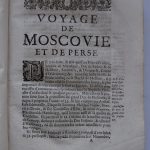 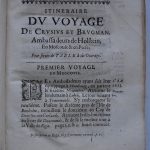 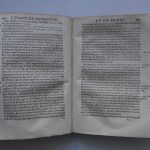 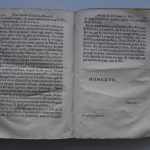 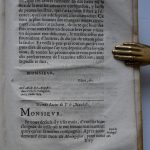 A very good copy of the first French translation of this important travel account to Moscow and Persia by Adam Olearius, German scholar, and secretary to an embassy sent by the small German state of Holstein to explore an overland trade route with Persia. The first embassy was dispatched to Russia in 1633-34 to secure the tsar’s permission to travel, and ship through his realm. The second was sent in 1635 to complete the deal with the shah of Persia. Although the commercial mission failed, the embassy was successful in the remarkable information gathered by Olearius. The embassy started from Gottorp in 1633 and travelled, by Hamburg, to Moscow where they concluded an advantageous treaty with Tsar Michael, and returned forthwith to Gottorp to procure the ratification of this arrangement from the duke, before proceeding to Persia. Their voyage down the Volga and over the Caspian Sea was slow and hindered by accidents, but they reached the Persian court at Isfahan and were received by the Safavid king, Shah Safi.

“The first edition of Olearius’ account of his travels was published in 1647 in Schleswig. An extended and restructured edition appeared in 1656: .. The [work] is divided into six “books” of which the fourth treats the mission’s route up to Isfahan, with detailed descriptions of Ardabil, Qazvin, Qom, Kāšān, and their stay at the Safavid court. Book five is an encyclopedic description of Persia, covering aspects such as geography, fauna and flora, political institutions, manners, customs and clothing, Safavid history, education, language and script, trade, and religion. The return journey from Isfahan is the subject of book six. Amongst the numerous ethnographic observations, mention should be made of Olearius’ depiction of the ʿAsura’ ceremonies and other Shiite rituals, including the recitation of a “Machtelnamae” and the celebration of ʿAli’s designation as the Prophet’s successor (“Chummekater;” p. 435ff., 456ff.). Of interest for the history of printing is the regular insertion of Persian and Turkish quotations in the original script, serving as a model for the later account by Engelbert Kaempfer. .. “Olearius provided the first comprehensive description of Persia since antiquity, but his achievements appear less significant when compared with the far broader range and experience of later travellers who wrote after him in the course of the 17 century” (Lohmeier, p. 59). Still, all later travelogues are heavily indebted to him and his work can be studied as a starting point for the genre. His outstanding contribution to the cartography of Persia is his Nova Delineatio Persiae et Confiniorvm veteri longe accurator edita Anno 1655, the first realistic map of Iran that, in particular, corrects the location and form of the Caspian Sea. ..He also acted as editor of books composed by other members of the Holstein-mission or travellers associated with the Duchy of Gottorp..” Encyclopedia Iranica.

This enlarged edition was also translated into Dutch, Italian and English. A very good copy of the first edition in French.