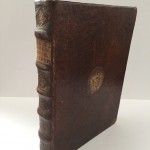 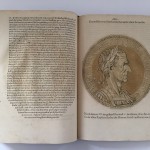 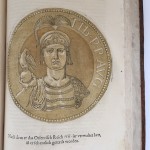 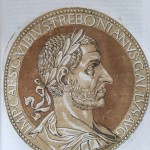 An unusually handsome copy of the FIRST EDITION in German of the FIRST BOOK with illustrations by the chiaroscuro process. The original Latin edition appeared earlier the same year. This splendid book is also the first in which a combination of etched plates and wood blocks are used in 133 large portrait medallions (plus 16 empty frames for portraits Goltzius never completed). The blocks are said to have been cut by Josse Gietleughen of Courtrai.

Goltzius (1526 – 1583) himself was a painter and engraver as well as a numismatist, with a passion for the remains of antiquity. The present work was the product of twelve years of study in Antwerp. Uniting these strands to produce a landmark in the history of book production, the illustrations remain dramatic and striking to this day. The German text is the rarest of the versions which appeared more or less simultaneously (aliter Latin, Italian and Spanish), and the portrait colour, which varies amongst them, tends towards a deep terracotta which is particularly pleasing. This copy is also free from the heavy show-through to the reverse of the portraits which spoils the work.

In 1726 Johann Georg Freiherr von Pichelstorff und Altenburg built a castle at Dross in the vast forest expanse called Waldviertel, Lower Austria. There he kept a considerable library of 17th- and early-18th-century illustrated books relating to festivals, architecture and history, of which this was a part. The castle still stands today.