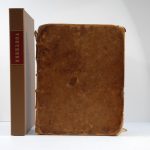 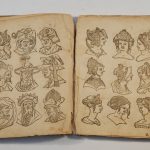 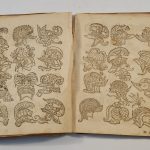 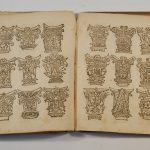 4to. 25 of 28 unnumbered leaves. A-G4. [lacking A1, B1, G4, top two thirds of E4.] Over six hundred woodcut illustrations, small ink drawing of a head in profile on pastedown. Light age yellowing, a little dusty and thumb marked in places, clean tears in C2 and D4, three leaves with tears at gutter not touching woodcuts. A good copy, clean with strong impressions of the woodcuts, in early calf over thin boards, most of spine lacking ,corners worn, faded inscriptions on covers.

Extremely rare example of this wonderful artists book, a very popular sixteenth-century artisan’s pattern book. It has exceptionally close copies of the woodcuts in the original, which appeared in 1537 in Strasbourg. The illustrations also appear in identical layout in both editions suggesting that they were cut on a single block for each sheet. “there are 9-12 desgigns on each of the ..pages. all distinguished by beauty and originality.” The sheet of shields, or arms, differs entirely in this edition to the first Strasbourg, though the rest of the plates are nearly identical. “For the most part, however, early pattern books were intended for professionals, they very o en say so in the title, and most of them offer little or nothing in way of instruction for use, assuming that the user would know what to do with the patterns. For instance, Heinrich Vogtherr’s ‘Ein Frembds und wunderbards Kunstbuechlin’ ‘(a new and wonderful little art book such as never been seen by anyone or published, very useful for painters, woodcarvers, Goldsmiths, stonecutters, carpenters, armourers, and cutlers) published in Strasberg in 1538, tells in the short introduction nothing about what to do with the pages of men’s and women’s headdresses, styles of parade armour, feet (bare or in Roman sandals), hands in every conceivable position, and a variety of architectural capitals and pedestals. Instead Vogtherr tells why he made his book, aimed at third-rate artists and artisans: -“because the good lord, through divine ordinance, has brought about a marked reduction of all ingenious and liberal arts here in Germany, causing so many to turn away from art and try other trades, that in a few years painters and woodcarvers one seem to have all but disappeared. To prevent painters, Goldsmiths, Silk embroiderers, stonecarver, cabinet makers, and so on from giving up and tiring, I Heinrich Vogtherr, painter and citizen of Strassburg, have assembled an anthology of exotic and difficult details that should guide the artists who are burdened with wife and children and those who have not traveled. It should store stupid heads and inspire understanding artists to higher and more ingenious arts until art comes back to its rightful honour and we lead other nations.” Janet S. Byrne ‘Renaissance Ornament Prints and Drawings.’

“It must be born in mind that these [cuts] of the Antwerp editions are not, as generally believed, the original cuts, but remarkable close copies of them, very difficult to distinguish when apart.” Fairfax Murray. Such works are now of the greatest rarity as they were of real practical use to their first owners and used such, almost as tools would be. “The very nature of pattern books led to their ultimate destruction. Individual patterns were o en torn out for use, sometimes tacked on the wall, traced pricked, chalked, oiled or perhaps just fingered to death in the transfer process.” Janet S. Byrne. An extremely rare survival, of these beautiful illustrations. Worldcat locates three copies of the 1540, and two of the 1572 Antwerp editions.