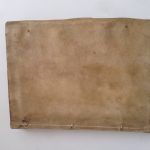 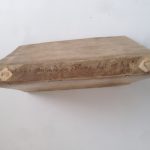 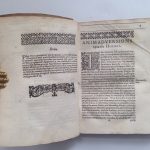 Animadversions upon M. Seldens History of Tithes, and his review thereof: before which is premised a catalogue of seventy two authors, before the yeere 1215

First edition of Richard Tillesley’s (1582-1621) response to John Selden’s 1618 History of Tythes. Tillesley, after studying at Oxford, received two rectories in Kent, and was installed as archdeacon of Rochester. As a good clergyman, Tillesley believed that tithes were the church’s by divine right; Selden, on the contrary, had set out to demonstrate that tithes were an historical development, and not established iure divino. Any attempt to counter Selden’s arguments might have been considered foolhardy, given the great jurist’s formidable reputation as a scholar and historian, but three concerted responses were produced not long after the work’s publication (as recorded by Wood, Athenae Oxon. II, 303). Tillesley and Richard Montague dealt with the legal side, and Stephen Nettles with the Rabbinical or Judaical.

Tillesley’s treatise is dedicated to James I (who had forced Selden to apologise for his work) and represents an “aggressive attack” (DNB), which triggered a rapid exchange of apologiai between the two scholars. Selden was sufficiently provoked by Tillesley’s Animadversions to issue a privately-circulated response. The text of Selden’s pamphlet is reproduced, with a further counter-attack, in Tillesley’s updated second edition of the present work, published in 1621.

Tillesley treats the historical aspect of the tithes controversy in minute detail, quoting liberally from the relevant Classical, ecclesiastical and historical authorities. Seventy-two authors, from AD 180 to 1215, are listed in a preface to the main argument, with brief summaries of their position on the question of tithes. Tillesley endeavours to demonstrate that tithes had been continuously and universally enjoined by divine law. Particular attention is paid to the English church, where Tillesley makes use of documentary sources, such as the foundation documents and ledgers of various churches. Lest the question be reduced to a sectarian matter, he urges that no-one “be persuaded that the originall of exacting Tythes, was from the insolencie of the Pope”. Scholarly though Tillesley’s work is, there are points where he fails to appreciate the subtlety of Selden’s arguments, such as in his attempts to confute his adversary’s distinction between ‘divine natural law’ and ‘ecclesiastical or positive law’.

Francis Thompson is possibly the Yorkshire MP of the same name, fl. 1670, who sat on many committees, including one to reform the bankruptcy law. He married, aged 14, Arabella Alleyn, an orphanned heiress whom his father had kidnapped as a suitable spouse.