FROM THE FOUNDATION LIBRARY OF EMMANUEL COLLEGE 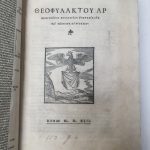 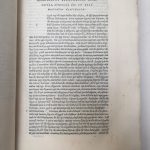 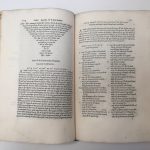 EDITIO PRINCEPS. Folio. pp. [viii] 581[i]. Greek letter. Woodcut printer’s device on title. Faint dampstain to lower corner of a few leaves, occasional fingermark, a very good, clean and well-margined copy in 16th-century English (almost certainly Cambridge) blindstamped reversed calf, covers with central blindstamped arms of University of Cambridge within arabesque cartouche, blindrules and corner fleurons, R. Culverwell giltstamped in upper blank portion of upper cover, endleaves from an early 16th-century edition of the Sermons of St Augustine, and fragments of a 14th-century ms. as guards (one being a fragment of Augustine’s Sermon 43). Contemporary giltstamp of Richard Culverwell on binding, late 16th-century ms. in libris of Culverwell or of Emmanuel College Cambridge, with shelfmark, on pastedown, 19th-century bookplate of the Earls of Macclesfield on verso of tp, their armorial blindstamp to first two leaves. A handsome and historic volume.

EDITIO PRINCEPS of Theophylact’s influential interpretation of the four Gospels; a rare survival in private hands from the earliest library of Emmanuel College, Cambridge, in probably its original binding. Theophylact (died after 1107) was a scholar of high reputation who became the tutor of Constantine Ducas, son of the Emperor Michael VII, for whom he wrote ‘The Education of Princes’. About 1078 he went to Bulgaria as Archbishop of Achrida; a role he did not cherish and sought to be relieved of. In his letters, he complains often of the rude manners of the Bulgarians. “His commentaries on the Gospels…are founded on those of Chrysostom, but deserve the considerable place they hold in exegetical literature for their appositeness, sobriety, accuracy and judiciousness” (Enc. Brit.). Blado and his heirs published typographically elegant works in Rome from 1516 to 1593, where they ranked as counterparts of the Aldi. He was “forse il migliore dei tipografi romani del Cinquecento” (Ascarelli & Menato, p. 100). Blado printed a small number of works in Greek, Hebrew and Ethiopic, being mostly employed by the Camera Apostolica.

This copy is from the library of Richard Culverwell, one of the earliest benefactors of Emmanuel College, Cambridge, and involved in its foundation. The College was established in 1584 by Sir William Mildmay on land purchased the year before by Culverwell and his relative Laurence Chaderton, afterwards first Master of the College (without whom, Mildmay said, he would rather found no College). It was a Puritan foundation from the start, and grew rapidly. Culverwell left 5 volumes to the College library c. 1584, the present one being recorded in the catalogue of 1637 as 21.S.27 (noted as being ‘Missing’.); another of his books found its way into the library via the Branthwaite bequest in 1619. That work has a very similar binding, with the identical central tool and gilt lettering (see p. 49 of Bush op. cit. infra.).

John Harvard was an undergraduate at Emmanuel in the 1630s and when he died in 1638 he followed Culverwell’s example leaving half his estate and 320 books to found America’s first university. Remarkably, a third of the first hundred British graduates to settle in new England were from Emmanuel, where there is a plaque in Harvard’s memory.