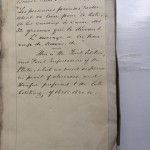 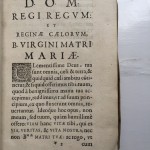 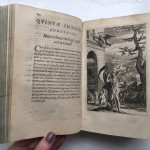 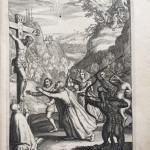 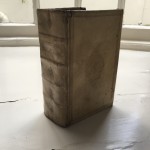 Beckford’s copy of the first edition of ‘an immensely popular book’ (Praz) of Catholic devotion. Antoine Sucquet (1574 – 1627) was a Belgian scholar and leading member of the Jesuits in the Low Countries. Together with his Testamentum Christiani hominis, this is his only published work, providing complex visions of Heaven and Hell through a strong combination of text and images. Each emblem is beautifully illustrated with a high-quality plate by a pupil of Rubens, the Flemish artist Boëce van Bolswer (1580 – 1633), and is accompanied by biblical quotations and in-depth explanations in prose referring to the figures depicted. The book found immediate success, with frequent reprints and translation into the main European vernacular languages, even if no later edition was able to retain the remarkable style of the engravings illustrating this editio princeps.

As pointed out in the modern pencil annotations on the front pastedown and the following cut-out from an early twentieth-century sale catalogue, this copy comes from the library of two eminent British collectors, William Beckford (1760 – 1844), and the 10th Duke of Hamilton (1767 – 1852). It was sold as lot 2302 during the eleven day-sale of the third portion of his renowned collection, in July 1883. In light of Beckford’s interest in Catholic culture, it is not surprising to find marks of his illustrious ownership on Jesuit books.