Two very good, clean copies of these important theological works (with the first edition of the second), edited by Erasmus (1466-1536), the greatest humanist and philologist of the northern Renaissance. He was the first humanist to truly engage with the works of the Fathers of the Church and early theologians praising—only a few years before the Reformation—their exhortations for a unified church. In 1514, he arrived in Basel to meet Johann Froben, renowned abroad for his attention to editorial detail, who had accepted to publish his monumental commentary to St Jerome. Erasmus eventually settled in Basel for several years, where he produced his major editions and was paid to work as a ‘learned corrector’ at the press. ‘The close personal relationship between these two men is perhaps unparalleled in the history of authors and their publishers’ (Bloch, ‘Erasmus’, 109-10). Erasmus rated the writings of Cyprian (200-258AD), bishop of Carthage, as being nearly as important as Jerome’s; he published the first edition of his complete works, based on both printed and ms. texts, in 1520. Cyprian’s epistles and books were concerned with pastoral activity, touching on subjects like the ordination of priests and the worshipping of idols. Erasmus categorised five works (explaining why in the preface) as ‘falsely ascribed’ to Cyprian, at a time in which ‘the difficulty of separating genuine from spurious patristic works was acute’ (Peters, ‘Erasmus’, 256); however, ‘De exhortatione martyrii’, found among his genuine works, was later attributed to Erasmus himself.

The Greek bishop Irenaeus (130-202AD) was active in southern France, where he assisted the expansion of Christian communities. As a boy he had heard the preaching of Polycarp, disciple of John the Evangelist, and was known to other disciples who had seen the Saviour; hence, in Erasmus’s words, ‘Through Irenaeus […] we hear the words of Christ’. His ‘opus’ included works on heresy, the doctrine of Simon Magus and those of sects like the Gnostics.

One early annotator of this copy was interested in a wide range of topics including heresy, penance and communion, celibacy and the purity of priesthood. Some of his glosses are enthusiastic or colourful: e.g., near a passage on Christian fortitude against temptation he writes ‘the devil’s vases are full of threats’ with the word ‘minarum’ meaning both menaces and pieces of silver; he admired Cyprian as twice he wrote ‘pulchra comparatio’ (beautiful comparison) on the margins. 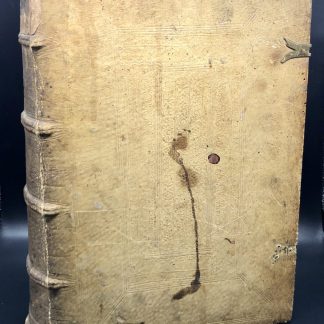