Rare and important first edition of Pierre de Lancre’s ‘magnum opus’ on witchcraft, the summation and extension of all of his other works on the subject, dedicated to the young King Louis XIII with his superb engraved portrait. The book is divided into ten treatises. In the first, the author attempts to prove that witchcraft is a reality, that all that has been said  of sorcerers in the major witchcraft treatises is true. The second, titled ‘De la Fascination,’ demonstrates that witches can ‘fascinate’ or bewitch by using the devil and his power. The third is dedicated to ‘touch’, where he shows what magicians can do by touch, which is much more powerful than the gaze. In the fourth treatise, which deals with scopellism,or black magic, he tells us that, by the use of secret spells, people can be cursed, for example, simply by throwing charmed stones into their garden. The following treatise describes all forms of divination. In the sixth he deals with diabolic ‘liasons’, sexual and otherwise, the seventh concerns apparitions. The eighth treatise concerns Jews, apostates and atheists and the ninth heretics, particularly Protestants. In the last chapter he denounces the incredulity and disbelief of judges in regard to witchcraft. In each chapter he cites very numerous sources and gives most interesting examples, many witnessed first hand, of the practises of witch-craft.“De Lancre was born in Bordeaux around 1553. First educated by Jesuit teachers in Toulouse and Turin, he then studied at the Jesuit College de Clermont at Paris, where he probably listened to Father Maldonat’s famous lectures on demons and the immortality of the soul. After he received his doctorate in law in 1579, he set out on a career as a lawyer in Bordeaux. Around 1582 he joined the Bordeaux Parlement as a magistrate. From 1599 through 1600, de Lancre traveled in Italy. fluent in Italian, he accompanied Pietro de Medici during the Prince’s visit to Bordeaux. In 1607, he published his first witch tract ‘Tableau de l’inconstance de toutes choses’. Shortly after his return to Bordeaux on 5 December 1609, de Lancre began to work on ..an extraordinary report of his four month stay in the Labourd region. It was published under the title ‘Tableau de l’inconstance des mauvais anges et demons’.. in 1612. After his return to his post in Bordeaux, de Lancres served as a counsellor in Paris from 1612 to 1622. That year he published a third witch tract, a résumé and extension of his previous two. (this work).. De Lancre’s stance in all his treatises on witchcraft, though it may seem extreme to us today, was shared by many of his educated contemporaries. He was convinced of women’s inclination toward evil and the reality of witch-craft, embracing the ‘realist’ view initiated by Heinrich Kramer in the Malleus Maleficarum (1487) and shared by other prominent demonologists such as Jean Bodin and Martin del Rio: the belief that witches, male or female, are real and that they fly to the sabbath, adore satan, engage in unnatural sex, and plan the evil deeds (maleficia) that they will perpetrate when they return to their homes. De Lancre knew the classics of the science of demonology well and – like Kramer, Bodin and Del Rio – was convinced that a stern judicial approach to what he believed to be a veritable witch infestation of France was primary in any attempt to control the practise of satanic magic.” Gerhild Scholz Williams “On the Inconstancy of Witches: Pierre de Lancre’s Tableau de L’inconstance .”A handsome copy of this important work on witchcraft. 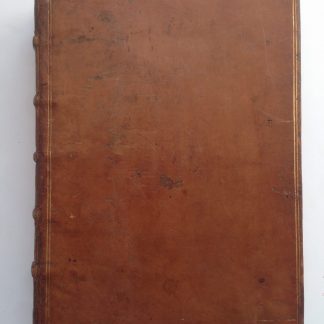