This copy belonged to the young Johannetta Elisabeth (1593-1654) von Nassau-Dillenburg, aged ten in 1603, the date of the ex-libris. That her father’s arms were stamped on the upper board suggests it was a gift for her French lessons. Her ex-libris casts her as ‘fräulein zu Nassau Catzenelnbogen’. Her father—from whom the later House of Orange-Nassau, including William III of England, descends—was Johann VI, Graf (Count) of Nassau-Dillenburg (and Katzenelnbogen-Diez), and brother of William the Silent, first Prince of Orange.

A very good, unsophisticated copy of the scarce second edition of this French-German dictionary, with a four-verse prefatory poem by Pierre de Ronsard. Born in Belgium, the polymath Levinus Hulsius (1546-1606) settled in Nuremberg in the late 1580s, became a notary, one of the earliest traders in mathematical-astronomical instruments, and, from 1596, a writer and publisher of scientific books, dictionaries and geographical works such as a Latin and German edition of Sir Walter Raleigh’s ‘Description of Guiana’. The scant copies that survive, especially of the early editions, suggest Hulsius’s dictionary was extremely popular, and copies were quickly worn out by use. Whilst the 1596 edition of this French-German dictionary was in quarto, with a German preface, this second was a pocket version, with a French preface. The French material is based on Mellema’s French-Dutch dictionary (1592); Hulsius’s became, in turn, the main source for subsequent trilingual and quadrilingual dictionaries. The interesting first section comprises a study of French and German pronunciation, which sheds light on their phonetic changes over time, and the history of their teaching for practical use. It is followed by a brief survey of French and German grammar and syntax, and the two lexical parts. Among the everyday words included are ‘Alchymie, autrement dite Chymie’ translated as ‘die kunst Golt zumachen’ (the art of making gold), ‘Alcoran des Turcs’ as ‘das Gesezbuch der Turcken’ (the law book of the Turks), and colours—among the most difficult concepts in translation (e.g., ‘Himmelblaw’ rendered as ‘Asur Celestin’ or, more literally, ‘couleur du Ciel’). The young owner highlighted only one word: ‘espouantable’ (dreadful). 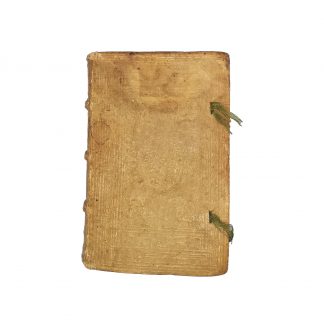