EDITIO PRINCEPS. 4to. ff. 72 unnumbered. A- . Greek letter, in red and black throughout. Fine woodcut floriated head-pieces and decorated initials, Engraved bookplate ‘Joseph Gould, Balliol College’ (1797-1866) on front pastedown, and his ownership inscription ‘Joseph Gould Burwash Sussex 1840’ on recto of front flyleaf, Edward Cyrill Simpson’s (1894-1979) bookplate below, a few marginal notes in a 17th-century hand, front pastedown with early notes (probably in the same hand) about the tools used for the binding, ‘Sum Germani’ and Grec mss in very early hand on top and lower edge. Light age yellowing, light water-staining in upper outer corner in places, a few small stains and spots. Very good large copy, on thick paper in splendid contemporary English dark calf over wooden boards by John Reynes, covers triple blind ruled to a panel design, centres filled with two large blind panels, the upper (Oldham Panels Rel. 5) with a shield in an arched frame with the instruments of the Passion, unicorns to the sides, the inscription ‘Redemptoris Mundi Arma’ below and the two marks of Reynes above, second panel (Oldham Panels HE. 21) divided into two compartments, one with English royal arms, the other the Tudor rose within scrolls, supported by angels and Reynes’s marks, spine rebacked with original spine laid down, two metal clasps restored, original catches on lower cover, upper cover a little rubbed but panels stamps generally remarkably preserved. In modern fleece-lined cloth box.

Extremely rare and important Editio Princeps of John Chrysostom’s liturgies, the most commonly celebrated forms of the Divine Liturgy, the only Greek book printed in Rome by the Cretan Demetrios Doukas (c.1480-c.1527). A second edition followed from the da Sabbio press in Venice in 1528. Doukas, from Crete, had worked as an editor for Aldus Manutius in Venice before becoming professor of Greek at the Complutensian University in Alcalá in 1509, where he had worked on the Greek text of the Polyglot Bible. This is his only publication, and it is thought that he used the type of Zacharias Kallierges, whose press in Rome had ceased publication in 1523. This copy is in a splendid, contemporary binding, executed in London by the renowned binder John Reynes, stamped with panels containing the English royal arms and the Tudor rose. The panels are here in the first state with a pomegranate, the badge of Catherine of Aragon, the first of Henry VIII’s wives, who was Queen of england between 1509 and 1533. The first state is very rare after 1530. In about 1532 Reynes dropped the pomegranate and replaced it with a cock, one of Henry VIII’s badges. “It was in 1531 that Katherine left the court and ceased to be treated as queen, and the use of HE.21 becomes rarer and rarer in the last few years down to 1530, and is found after that only on two books dated 1532.” Oldham. A very well preserved example of a John Reynes binding on a rare Roman edition which must have reached England shortly after its publication as it was certainly bound before 1532.“In the setting of the advancement of Greek letters in late Renaissance Rome and with the patronage of Pope Clement VIII, in 1526 saw the publication of the editio princeps of the three Byzantine eucharistic formularies. The preface tells us that the work, “intended for all Orthodox Christians” was edited by Demetrios Doukas, a Cretan. We know nothing about the sources he used, but is is probable that in addition to the editor’s own choices, the text reflects typically Cretan usages. The publication was very widely circulated and was several times reprinted in Venice. The spread of a handy printed text led to the suppression, in Greek circles, of various local usages, although these continued in Russia until 1651, when Patriarch Nikon and the council he convoked approved the revision of the liturgical books along the lines of the Greek texts. This gave rise to the schism of the “Old Ritualist”. The present day “Byzantine” liturgy is thus the text of the new, eleventh-century Constantinopolitan recension, celebrated according to rubrics set down on Mount Athos in the fourteen century and in the particular redaction made by a Cretan humanist at the behest of a Roman Pope.” Anscar J. Chupungco ‘Handbook for Liturgical Studies: The Eucharist.’A beautiful copy of this rare and important Editio Princeps. 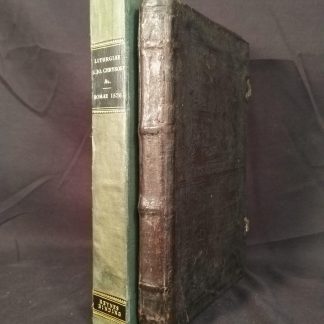