CHURCH OF ENGLAND The primer in Englishe [and] Latin: set forth by the kynges maieste [and] his clergie to be taught learned, [and] read: [and] none other to be vsed throughout all his dominio[n]s. [with] The epystles & gospels, of euery Sondaye

Exceptionally rare editions of these two early vernacular ‘Books of Hours’ the first is the last of Henry VIII’s Primers and the second ‘The Sunday Epistles and Gospels’ was printed two years later during the reign of Edward VI. Both works are of great importance, made at the very foundation of the Anglican Church. The Primer is a book of devotion and instruction, a prayer book to be used by ordinary people on a daily basis that contains “prime texts” such as the Creed and the Lord’s Prayer. “The period 1544-1560 is important for the study of the Anglican litany. Composed in 1544, it was revised slightly in 1547-1548 and again in 1558-1559. The litany was first printed in a booklet entitled An exhortation to prayer… Also a litany…. From 1545 it was included in the primer issued by Henry VIII and subsequently by Edward VI. From 1549 it was included in the Book of Common Prayer in its several editions. .. The Catholic litany of the saints was also printed and used during the period 1544-1560, especially during the reign of Queen Mary I but occasionally during other reigns as well.” J. Frank Henderson ‘Anglican and Catholic Litanies and Primers in England 1544-1559.’

“The King (Henry VIII) had issued a letter on August 20th, 1543, desiring ‘general rogations and processions to be made’ owing to the rain and bad weather; other troubles, such as war and pestilence, were also pressing upon people both at home and abroad. The people responded but slackly, and this slackness was put down partly to the fact ‘that they understode no parte of suche prayers or suffrages as were used to be songe and sayde’: consequently (June 11th, 1544) there were ‘set forthe certayne godly prayers and suffrages in our natyve Englishe tongue’ to this ‘Letanie with suffrages to be said or songe in the tyme of the said processyons’ there was prefixed ‘An exhortation unto prayer, thoughte mete by the Kinges Maiestie and his clergy to be read to the people in every church afore processyons.’ This litany represents the present English Litany in its actual form, with the exception of three clauses of invocation, and very nearly in its present words. The work was no doubt done by Cranmer, and was probably his first essay in this direction. .. It is important, however, to consider the relation of reform to the books of private devotion, and especially to call attention to the King’s Primer, which was issued about the same time as the Litany. .. Shortly after this, about the year 1541, the King began to exercise some modifying influence on the Primers, and this led up to the issue, in 1545, of King Henry’s Primer, which quickly brought to an end the series of Primers of the old type. This included the new form of Litany as issued in the previous year, with revised forms of the Hours of Our Lady and the Services of the Dead, besides other prayers both old and new. Here for the present things rested, both with regard to public and private worship.” Francis Proctor ‘A New History of the Book of Common Prayer’. This edition printed three years later was the last of the Henry VIII primers. It is exceptionally rare; ESTC records two copies only one at the BL the other at Yale University. The second work is even rarer, recorded in one copy only at St. Pauls Cathedral. 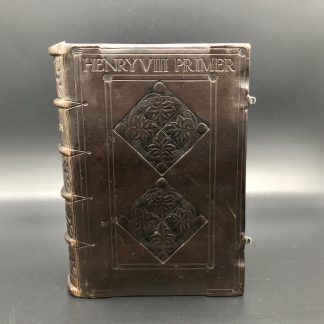