Excellent edition, very finely printed in a minuscule Roman type, of the abridged text by Regnerus Vitellius (reprinted from the 1617 edition) the first to include 19 maps reprinted from Petrus Bertius’ miniature world atlas Tabularum geographicum contractarum (1616). “[In Camden’s ‘Britannia’] the slight treatment of all that is understood to-day to be material to geographical description stands out in contrast with a most minute attention to matters of historical detail. For in fact it is local history that is the real theme of the Britannia, and to Camden and his contemporaries … the simple elucidation, identification, and mapping of the place names occurring in historical records deserved the title of ‘restoration of ancient Geography’. Mercator and Ortelius, great modern cosmographers though they were, also found their keener delight in the study of antiquity, and it was during his English visit of 1577 … that Ortelius pressed upon Camden the publication of his researches into the ancient state of Britain’ (Taylor, Late Tudor and Early Stuart Geography New York, 1968, p.10). A very good copy of this popular pocket topography with all maps in strong clear impression.

Camden’s ‘Britannia’ was first printed in 1586. Its immediate success led to many reprints, the first continental edition appearing in 1590. The work was originally printed as an unillustrated text and it was at the suggestion of the readers, who regularly wrote with the addenda and corrigenda which furnished the later editions, that maps were added. Camden, in fact, sought Ortelius’ advice on the matter of securing maps for future editions. The majority of the 19 maps in this edition were reduced from the plates of the group county maps in the Mercator-Hondius ‘Atlas’ of 1595 while the maps of Anglia, Scotia, Cambria and Hibernia were taken from the first edition of Bertius’ ‘Tabularum’ (1600). Vitellius, who is responsible for this abridgement, is Reinier Telle (1578-1618), the translator of Guicciardini’s ‘Belgicae’ (1614) and Henry Hudson’s ‘Descriptio ac delineato geographica detectionis freti’ (1612) and possibly the same Telle who contributed the text to Abraham Goos’s ‘Nieuw Nederlandtsch Caertboeck’ of 1616. This abridgment of Camden’s ‘Britannia’ was not published in English until 1701. 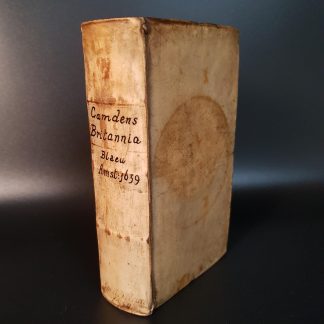