DISAPPOINTMENT IN LOVE AND POLITICS

The elegant binding provides a good example, unusual in shape, of the essential Venetian style of the second quarter of the sixteenth century (gilt external panel with apple leaves at internal or external corners, central title in capitals), which was brought to perfection by the so-called Mendoza Binder, recently identified as Andrea di Lorenzo. Though not his work, this was executed by a capable binder, probably pre-dating Andrea by a few years. The gilt initials on the rear cover appear to be those of the owner, perhaps pointing towards a member of the Venetian noble families of Mocenigo or Morosini, bearing the traditional names of Marco or Michele.Early and accurate imprint of Boccaccio’s Corbaccio (or Labirinto d’amore) and his epistle to Pino de’ Rossi, both first published in 1487 in Florence. With Petrarch, Boccaccio laid the foundations for the humanism of the Renaissance and raised vernacular literature to the level and status of the classics of antiquity. His vivid prose was taken as a model by the sixteenth-century Renaissance scholars in their attempts to create a common written language for the Italian peninsula. Corbaccio (The Crow) recounts the dream of a young man, suffering from his unrequited love for a widow. It is essentially a misogynist invective, contradicting Boccaccio’s sympathies for the fairer sex expressed in many others works. It is still not clear whether Corbaccio should be read as autobiographical or as a literary exercise adopting the anti-feminist point of view but ultimately dealing with torment of love. Written after the political crisis of 1360 in the Commune of Florence, the letter of consolation to Pino de’ Rossi, an exiled Florentine statesman, reflects Boccaccio’s disillusion with politics and his faith in the rise of a new cultural era opened up by Petrarch’s studies of classical literature. The preface by the publisher Bernardo Giunta is of particular interest. It addresses ‘gli amatori della Lingua Toscana,’ i.e. the humanists writing in Italian vernacular, who were praised for their constant effort to re-establish this style as a literary language, as it used to be in the time of Boccaccio. 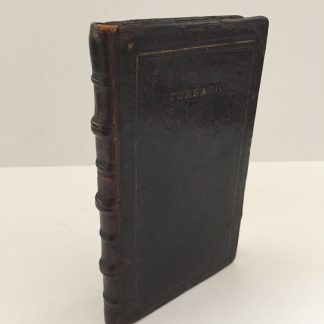