Third unaugmented edition of these pioneering treatises on the geography, anthropology and evangelisation of South America, previously published in Salamanca in 1588/1589 and 1595. José de Acosta (1540-1600) was among the first Jesuit missionaries to embark for the Spanish New World. He spent much of his life in Peru. The main settlement of the order was at that time in the village of Juli, on Lake Titicaca. Here, a college was set up to study the languages of the natives, while the newly-funded Jesuit printing press issued the first printed book of the Americas in 1577. Later, Acosta moved to Lima and taught theology at the university. In the Third Council of Lima (1582-1583) reorganising the American church, Acosta took a very active part and became its official historian. Following an adventurous journey through Mexico, in 1587 he head back to Spain, where he was appointed head of the Jesuit college in Valladolid and later Salamanca. A prolific writer, he is mostly famous for his very successful Historia natural y moral de las Indias. This knowledgeable, realistic and detailed description of the New World was sought after and soon translated into Italian, French, German, Dutch and English. The Natura novi orbis opening this edition represents the early draft of the Historia. In it, Acosta provided the first account of altitude sickness, which affected him while crossing the Andes. He also divided the Amerindians into three categories, acknowledging the Incas and Aztecs as fairly advanced societies in the civilisation process. The second part comprises a very innovative essay on evangelisation. Acosta struggles to demonstrated to his contemporaries that Amerindians were part of the original God’s plan for mankind and thus were not inferior creatures undeserved of being Christianised and saved. In grounding his argument, the idea that the first inhabitants of America migrated from the biblical world (specifically from Asia), played a crucial role. Indeed, he was the first writer to postulate the existence of a land bridge at the northern or southern extremities of the two continents, long before the discovery of the Bering Strait. In his missionary zeal, Acosta was much concerned with the preparation and morality of priests, who he encouraged to study the aboriginal languages as an essential part of their duties.

‘One of the earliest writers who have treated philosophically of America and its production.’J. Sabin, A Dictionary of Books Related to America, I, p. 17.BM STC Ger., p. 2; Adams, A 124; Brunet, I, 41; Graesse, I, 15; Leclerc, 4; Palau y Dulcet, I, 1979; Sabin, I, 120. Not in JFB nor in Alden.
Stock Number: L1787 Categories: Americana, Central and Latin America, Religion Tags: Early Books, Geography, History, Jesuitica, Latin America, Subjects & Interests 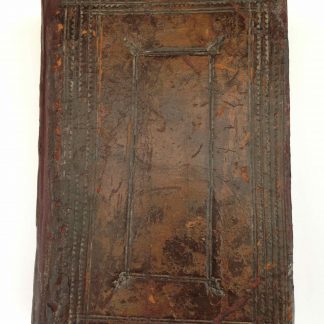