THE ONLY AVAILABLE SHAKESPEARE QUARTO? 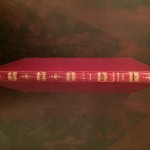 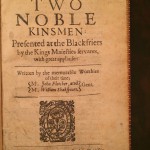 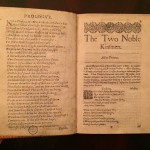 The Two Noble Kinsmen Presented at the Blackfriars by the Kings Maiesties Servants, with Great Applause.

Exceptionally rare and important first edition, the only quarto edition, printed by Thomas Cotes who was also the printer of Fletcher’s ‘The Faithful Shepherdess’ (1629) and Shakespeare’s ‘Poems’ (1640). The play had not been included in the first folio of 1623, and did not find its way into the subsequent Shakespeare folios; but the quarto edition became the basis of the 1679 Beaumont and Fletcher folio text. The title states that it was ‘written by the memorable worthies of their time; Mr. Iohn Fletcher, and Mr. William Shakespeare. Gent,’ and modern scholarship has identified Shakespeare as the author of act I, act II scene 1, and act V.

Fletcher collaborated regularly with Beaumont, however this collaborative work between Fletcher and Shakespeare is unique. Based on Chaucer’s ‘Knight’s Tale,’ it was produced in either 1613 or 1614. ‘The Two Noble Kinsmen’ is set in ancient Greece during a war between Athens and Thebes. The narrative follows the title characters, Palamon and Arcite, noble youths whose friendship is destroyed by their mutual love for the beautiful Emilia. The subplot deals with the love and eventual madness of the Gaoler’s Daughter, who falls hopelessly in love with Palamon. The play also has echoes of ‘A Midsummer Night’s Dream,’ as two of the major characters, Theseus and Hippolyta, also appear in the earlier play. The Rivals, a popular adaptation of the play by William D’Avenant, appeared in 1668 and 1669.

“The titlepage of The Two Noble Kinsmen states that it was ‘written by the memorable worthies of their time; Mr. Iohn Fletcher, and Mr. William Shakespeare. Gent’. Shakespeare has been identified as the author of act I, act II scene 1, and act V. The play was created in 1613 or 1614. The morris dance in act III scene 5 is related to the second antimasque dance in Francis Beaumont’s The Masque of the Inner Temple and Grayes Inne. The masque was performed as part of the wedding celebrations for James I’s daughter Elizabeth and Frederick, Elector Palatine on 20 February 1613. The name of Palamon, one of the principal characters in The Two Noble Kinsmen, is referred to in Ben Jonson’s Bartholomew Fair, first performed on 31 October 1614.The title-page of the quarto states that The Two Noble Kinsmen was ‘presented at the Blackfriars by the Kings Maiesties servants.’ A reference to ‘our losses’ in the play’s prologue suggests that it was written after the Globe burnt down on 29 June 1613. So it was perhaps written specifically for the Blackfriars playhouse. The Two Noble Kinsmen may have been considered for performance at court in 1619-1620. The inclusion of the names of two hired men (Tucke and Curtis) in the quarto’s stage directions suggests another revival in 1625-1626, when both were with the King’s Men. It has been suggested that the roles of Palamon and Arcite were originally played by John Lowin and Richard Burbage. The much younger actors Nathan Field and Joseph Taylor may have been intended for the roles in the 1619-1620 performances. (The) quarto, 1634 is thought to have been printed from a scribal transcript, to which revisions were made for performances in 1613-1614 and a revival in 1625-1626.” British Library, “Shakespeare Quartos.”

This copy is presumably the one offered in the Tite sale in 1874, also in red morocco by Bedford., lot 2762, which was sold to Hazlitt. William Carew Hazlitt (1834-1913) was a bibliographer and Shakespeare collector, grandson of the essayist William Hazlitt. Hazlitt published extensively on early English literature and in 1878 Mr. Huth engaged W.C. Hazlitt and F.S. Ellis to catalog his collection, the former cataloging English works, and the latter foreign. Hazlitt was also an assiduous collector and gathered in the course of his lifetime an impressive library of Shakespeare works and source texts, the basis for his Shakespeare’s Library, published in six volumes in 1887, an early and important edition of the works. The collection, itself of great literary importance, was sold in New York, 1918.

First editions of Shakespeare quartos have always been the holy grail of bibliophiles and collectors of British literature, immensely sought after as the high water marks of British culture and world literature, especially as these ephemeral printings appear so rarely on the market. They are considerably rarer than the folios. A handsome copy of this wonderful and rare work with distinguished provenance.