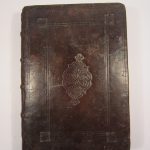 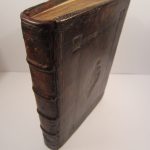 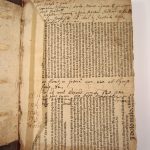 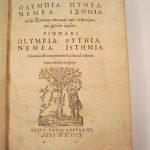 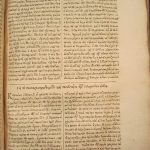 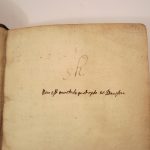 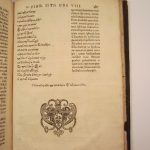 Probably the first of the few editions printed in Geneva by Paul Estienne between 1599 and 1626. An important edition of the greatest of the nine lyric poets of ancient Greece, first published by Aldus in 1513. Born near Thebes, Pindar (c.522-443 BC) was a highly successful poet, sought after by many city authorities for his extraordinary ability to immortalise with his verses the winners’ glory at agonistic games. These particular forms of encomiastic odes (epinikia) are the most famous and better preserved part of his large corpus and are all gathered in this book. This is the first and only Estienne edition of Pindar in quarto format. The Greek text is newly edited by Paul Estienne himself, with the assistance of his brother-in-law, Casaubon’ (Schreiber). Along with the original text and Latin translation column by column, it provides for the first time the ancient Greek scholia, laid out in the margins in a smaller font. Isaac Causabon (1559-1614) was a prominent scholar and classical philologist, considered by many contemporaries the most learned man of his time. Born a Huguenot, he taught in Geneva and Montpellier, resided in Lyon and Paris and was warm-heartedly invited to England, where he died. He produced a vast amount of long-lasting critical editions of classics, including Aeschylus, Athenaeus, Theophrastus, Persius and Suetonius. He collaborated extensively with the Estienne family press, his second wife being Henri Estienne’s daughter and Paul’s sister.