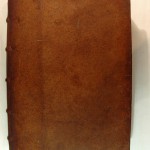 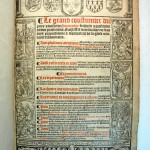 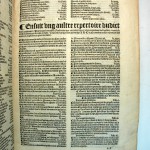 Important first edition of the customary laws of Normandie with the gloss of Guillaume Rouillé, including the Latin text. His commentary was so well appreciated at the time that he was asked to appear before the Norman Parliament, so they could congratulate him on his achievement. The principal dispositions of this Coustumier remained in use in their medieval state right up until the Revolution.

“There are two compilations of the customary law of the duchy of Normandy that were written in the thirteenth century. One, known as the Très ancien coutumier (the ‘very old custumal’), was written in Latin about the year 1200 when Normandy was still part of the Angevin empire. French and Anglo-Norman translations of it are also known. The other, called by its editor the Summa de legibus in curia laicali (‘summary of laws in the lay court’), was composed, also in Latin, sometime between the years 1230 and 1250, at a time when Normandy was under the direct control of the French crown. It was later translated into French in a version that became known as the Grand coutumier de Normandie. … The last printed edition of the Grand coutumier de Normandie appeared in 1539 in an edition by Guillaume Le Rouillé, and that edition included the Latin text as a sort of appendix. In 1585, the custom was ‘reformed,’ and after that all the printed editions of and commentaries on the custom (and there are many) were of the reformed custom.” Charles Donahue, Harvard Law School Library.

English law has conserved large portions of Norman law, including some procedures and its use of language. It is most particularly conserved in the Channel islands. The work contains much of incidental interest to the social historian, including the privileges and laws concerning booksellers and the sale of books.

This copy belonged to the Statesman Sir George Rose, Treasurer of the Navy. Rose was a close friend of Admiral Lord Nelson. He first met Nelson when the latter was a young Captain and had just returned from the West Indies. Nelson invited Rose to go on board HMS Victory before the ship sailed for the Battle of Trafalgar to tell Rose that, if he was killed, he would leave Lady Hamilton and their daughter Horatia to the Nation. Rose was thus the last man in England to see Nelson alive. After Nelson’s death, Rose became Emma Hamilton’s executor and Horatia’s guardian, but Pitt’s death diminished Rose’s influence and his fellow Ministers did not support her. Rose was also a friend of King George III and his family who stayed with him a number of times at his house, “Cuffnells,” in Lyndhurst.