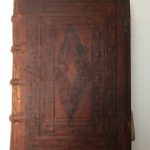 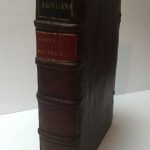 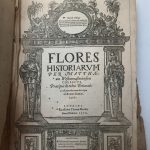 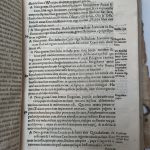 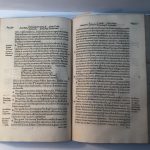 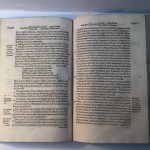 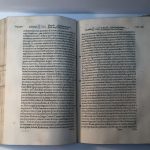 Second and best edition, variant issue, of a history of the world, from the Creation to the death of Edward I in 1307. It was edited by Archbishop Parker, who had access to further mss. after his edition of 1567, which relied on one early C14 codex now at Eton College, the final year was taken from Trivet’s ‘Annales’. He had also since become acquainted with Matthew Paris’ ‘Chronica Majora’ and Book 1, covering through the year 1066, follows closely the ‘Historia major’. Book 2 is an abridgement from the same work, with additions, covering 1067-1307. The additions from 1259-1273 have been attributed to William Rishanger. The Preface to the Reader, presumably by Parker, explains the changes made. The first record of the putative name of the author appears in the BL’s ms. of the early C15.

The work begins with Adam and splits the period before 1AD into five ages, the first ending before the Flood, the second before the death of Abraham, the third introduces Brutus, the mythical fugitive from Troy who built London and founded Britain, the fourth tells of the reigns of Solomon and David, also Janus and Saturn, Romulus and Remus in Italy, it discusses early Christian Rome and gives an early Christian acrostic from Augustine’s ‘De Civitate’, the fifth recounts early Gospel history before the Nativity. From then on, dates are given in the top margin, with the reigning King of England, beginning with Cymbeline, and the reigning Emperor. The events and the political history that follows is, for early England, written mostly from Bede, the later sources, thanks partly to Parker’s additions, are dominated by Matthew Paris. Still, considerable information is made available from other chronicles, Parker sees amongst others Walter of Coventry, Roger of Hovenden and the Chronicum Roffensis, all presumably in the C14 monastic libraries where this work was written (according to the book’s C19 editor, Luard, probably Westminster Abbey and St. Alban’s, and from various hands). “No English Chronicle, if we may judge from the number of Mss. that still exist, and from the use made of it by subsequent compilers, has been so popular.” Luard. Shakespeare used this work for many of the minor plot details in King John.