PERU AND THE WEST INDIES 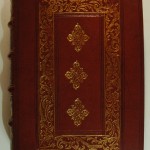 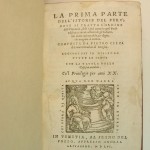 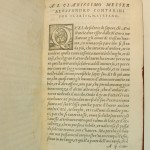 i) Pedro Cieza de León (1518-1584) served in the Indies under Pizarro and lived for 17 years in Peru. His ‘Istorie’ is based on this long stay and his travels from place to place in the “Great Kingdom”. Divided into 122 chapters it begins with the discovery of the Indies and the foundation of Panama, then describes historical events and geographical characteristics of the various provinces which Cieza visited, and offers a fascinating account of the habits of the indigenous peoples. “One of the more important sources for the early history of Peru. The author describes Peru’s resources, vegetation and Indian tribes from personal experience, and also comments on Spanish administration of the region” JFB C256 on the second edition. Cieza never published a sequel to this ‘Prima Parte’ (though according to Sabin p.73 it exists in ms.). Nonetheless, these two related essays by the Spanish-American historian Francisco Lopez de Gomara are habitually treated as the second and third parts, the first being a history of the Western Indies, the second of Mexico.

ii) Important early essay by Spanish-American historian Lopez de Gomara on the history of the New West Indies, “covering the discovery, early exploration and first settlement of the New World by the Spaniards,” (Sabin on 1564 ed). Beginning with a discussion of the nature and location of the ‘Antipodes’ – meaning those places on the opposite side of the world – the text moves on to discuss the life and times of Christopher Columbus and a wealth of information on the religions, customs, geographies and appearance, of i.a. Honduras, Cuba, Venezuela, Peru and Nicaragua. The text discusses the division of territories between the Spanish and the Portuguese, the lives and achievements of the principal conquistadors, conflicts and allegiances with the natives including the Incas and reports mass deaths amongst the local population due to the introduction of alien germs such as smallpox. Although Francisco López de Gómara (c. 1511-1566) never actually visited the New World, through his close acquaintance with Cortés and leading conquistadors he had unparalleled access to first-hand testimony and documentary sources making this work “indispensable to the student of Spanish affairs after the conquest” (Sabin) and a prime resource for 16th century Latin-American history.

iii) Continuation of Gomara’s history of the West Indies, dealing primarily with the conquest of Mexico and focused on the personality of Hernán Cortés, leader of the Spanish expedition. Cortes’ audacious adventures against Montezuma’s Mexican empire from 1518 onwards aroused great interest in his native Spain, and won rich and extensive colonies for Charles V. The work contains a considerable amount of biographical, anthropological and topographical information, in addition to a detailed and lively account of Cortes’ voyage and campaigns against the Aztecs, culminating in Spanish dominance over the former Aztec Empire. It concludes with a Nahuatl vocabulary and some general information on Aztec social customs, religious practices and cosmographical theories.

i) “One of the most remarkable literary productions of the age of Spanish conquest in America” (Markham) “the only book which exhibits the physical aspect of the country as it existed under the elaborate culture of the Incas” (Prescott II.328) in Sabin vol. 3-4 p.72. Sabin vol. 3-4 p74: “inconnue aux bibliographes.” BM STC It. 184. This ed. not in Alden or JFB. Medina I:257. Palau 54649.