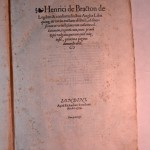 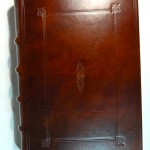 Divided into five books, each subdivided into chapters with subheadings whose contents are listed in detail in the extensive index in order of appearance, Bracton’s ‘De Legibus’, completed in the 1250s, occupies a unique position in the history of the common law. It is the first attempt to treat the whole extent of English law in a manner both systematic and practical, it constitutes the first modern English law book and it is the outstanding legal work of any English writer of the Middle Ages.

Bracton’s encyclopaedic work was essentially practical, designed for judges and lawyers dealing with the cases which arose on a daily basis throughout the kingdom. He cites some four hundred and fifty of them in support of the principles which he enunciates in the clearest and most reliable manner. An ecclesiastic as well as for a quarter of a century one of the first professional judges, he has sometimes been accused of Romanising English law but more accurately he systematized the results which a series of clerical judges, familiar with both the civil and common law codes, had already achieved in supplementing the inadequacies of the common law. Bracton restricted himself to the strictly practical purpose of describing the law he applied, he does not indulge in theoretic speculation. The superior quality of his work over all others made its influence both immediate and enduring. Coke had a high respect for it and cited Bracton freely, both in his judgements and commentary on Littleton, Bradshaw relied on it in his judgement of Charles I and Milton in his ‘Defence of the People of England. It constitutes one of the single greatest influences in moulding the common law of England of which it is “a statement so detailed and accurate that there is nothing to match it in the whole of the literature of the Middle Ages” Vinogradoff.

Remarkably this first edition was not superseded. The next, not until 1640, is a mere reprint and no other appeared until Twiss’ in the late 19th C – succinctly dismissed by Maitland as 6 volumes of rubbish. A more scholarly version was published by the Selden Society in parts between 1968 and 1977.

STC 3475. Lowndes I 250 “the best of the judicial classics”. “A model for legal literature until the present day.” Barnes, cit. Printing and the Mind of Man 89.