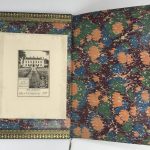 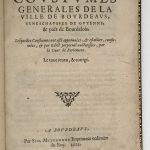 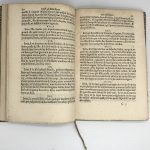 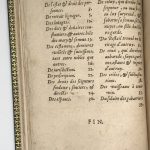 Very rare edition in French, finely printed by Simon Millanges (Montaigne’s printer), of the ancient customary laws of Guyenne and Bordeaux. “Under Francois I the ‘Anciennes Coutumes de Guyenne’ (Ancient Customary laws of Guyenne) were reformed to take into account the local bourgeoisie’s demands. The three estates of the sénéchaussée of Guyenne assembled in February 1520 to modify the old Coutumier. Several articles were suppressed or changed and new ones were added. The work lasted five months and the reformed Coutumier went into effect towards the end of 1527. Its territory was extended to include the former sénéchaussée of Bordeaux. The new customary law of Guyenne, which heavily favored the bourgeoisie, consisted of 117 articles written in a rather disorderly fashion and without much equity. Questions of inheritance and testamentary succession strongly recentered customary law around the transmission of property, and the goal of the great majority of the articles was to provide better protection for private property and to favor bourgeois property owners over the feudal territorial rights of noble landlords. The first article sets the tone of this rewriting of the customary law. It stipulates that every son of a merchant family engaged in commerce of other business (banking, brokerage, purchasing) “can make commitments wothout his father’s consent, in matters concerning merchandise or business” For example, children had the right to do business under their own names without depending on the authority of their fathers. In the spirit of liberalizing mercantile law, Article V reorganised the law governing the legacy of goods to descendants by specifying that lineal transmission henceforth always had priority over feudal law. Inheritances, successions, transmissions, and donations of buildings, as well as the regulation of rents and mortgages, were subjected to new interpretations favorable to the rising bourgeoisie and represented more than sixty articles in the ‘coustumes generales de la ville de Bourdeaus, Seneschaussée de Guyenne,’ between 1520 and 1527. the revision of customary law at the beginning of the sixteenth century was the end result of a long process of political redistribution in Bordeaux and in Guyenne .. The oldest text of this Coutume was printed in Bordeaux in 1528 by Jean Guyart. The Coutume was reprinted by Simon Millanges in 1611 and 1617, and again by Jaques Mongiron Millanges in 1661 and 1666.” Philippe Desan ‘Montaigne: A Life.’

The work has many interesting details concerning the wine trade; for instance a chapter on the correct use of containers and barrels for holding wine, or on the theft of grapes. A rare work, that gives fascinating insight into a town that was intimately linked, through its trade in wine, with England, and with the transition from a feudal to a Bourgeois society.